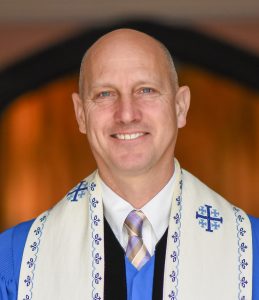 Rev. Robert (“Rob”) Hoch, Ph.D. joined the First & Franklin Presbyterian Church in June of 2016.  Ordained in 1995, Rob has served the Presbyterian Church (USA) as pastor and theological educator. He is also someone who you might see on a neighborhood walk, or collecting litter off a nearby roadside, or standing with immigrant peoples outside of the Federal Building in the City of Baltimore. Although some might say he is an activist, he prefers to see himself as a person who has activated his faith. This is what attracted him to First & Franklin Presbyterian Church. He saw a church that wasn’t afraid of creating controversy for the right reasons, most recently, leading the denomination for the full inclusion of LGBT people in the life of the church. Today, that commitment to do justice, love kindness, and walk humbly with God extends to partnerships with grassroots organizations in Baltimore dedicated to healing the wounds of violence in our city, both systemic and gun-related. Before joining First & Franklin Presbyterian Church, Rob served as a professor of homiletics and worship at the University of Dubuque Theological Seminary, Dubuque, IA. He and his spouse, Rebecca, have four children, Gwendoline, Imogen, Gabriel, and Iris. For holidays, they enjoy walking and camping. Rob and Rebecca completed the Coast to Coast walk in the United Kingdom and several other week-long walks in the Lake District. Rob’s published works include, By the Rivers of Babylon: Blueprint for a Church in Exile (2013) and City Preaching: Sermons on Death and Resurrection in Baltimore (2018).