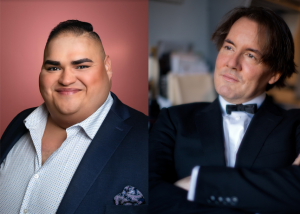 Mexican American tenor Joshua Diaz partners with pianist Mark Markham in music by John Carter, Henri Duparc, and Richard Strauss, along with Joshua’s interpretation of mariachi songs, a reflection of his family’s heritage. Hailing from San Angelo, Texas, Joshua received his Graduate Performance Diploma in Opera (2015) from the Peabody Conservatory. During that period, he also served as a staff singer and soloist in the First & Franklin Sanctuary Choir. Having performed many roles in both operatic and concert performances, Joshua has been praised for his “rich and agile voice and sensitive interpretation”.

Pianist Mark Markham’s international career encompasses performances in North and South America, Europe, Asia, and the Middle East. Equally at home as a soloist, jazz pianist and vocal coach, The Baltimore Sun recently praised Markham’s performance of Liszt and Chopin for his “big, rich tone,” “abundant power” and “sensitively using a wide palate of tone coloring.” His playing has been described as “brilliant”, “exquisite” and “in full service to the music”.