Late in the Day

Late in the Day 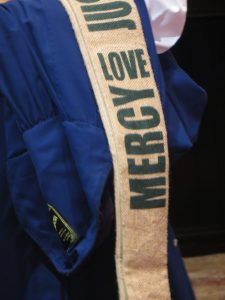 “For the kingdom of heaven is like a landowner who went out early in the morning to hire laborers for her vineyard. After agreeing with the laborers for the usual daily wage, she sent them into her vineyard. When she went out about nine o’clock, she saw others standing idle in the marketplace; and she said to them, ‘You also go into the vineyard, and I will pay you whatever is right.’ So they went. When she went out again about noon and about three o’clock, she did the same. And about five o’clock she went out and found others standing around; and she said to them, ‘Why are you standing here idle all day?’ They said to her, ‘Because no one has hired us.’ She said to them, ‘You also go into the vineyard.’ When evening came, the owner of the vineyard said to her manager, ‘Call the laborers and give them their pay, beginning with the last and then going to the first.’ When those hired about five o’clock came, each of them received the usual daily wage. Now when the first came, they thought they would receive more; but each of them also received the usual daily wage. And when they received it, they grumbled against the landowner, saying, ‘These last worked only one hour, and you have made them equal to us who have borne the burden of the day and the scorching heat.’ But she replied to one of them, ‘Friend, I am doing you no wrong; did you not agree with me for the usual daily wage? Take what belongs to you and go; I choose to give to this last the same as I give to you. Am I not allowed to do what I choose with what belongs to me? Or are you envious because I am generous?’ So the last will be first, and the first will be last.”

Matthew’s parable of the vineyard owner isn’t intended to comfort us . . . or it’s not intended to comfort those of us who show up on time, who put in our 8-hours or our 12-hours and count our value on those hours. If you hammer out a contract or expect that you will be paid what you’re worth, not a penny less or a penny more, this parable is likely to make you unhappy. It’s designed to expose our ideas about worth, value – and perhaps to reorient our ideas about what counts, the work we do or the people we are.

Maybe this text shocks us this way . . . socially and culturally, we’re on a path, a well-marked path, well-trodden path. We don’t even question it, really. Call that path meritocracy. The idea that you get rewarded for your talents and abilities. Michael J. Sandel, a political philosopher, believes meritocracy “is so familiar that it has come to define the American dream.” And it’s all so unquestionably virtuous, it’s all about “competing in a global economy” — we are told we must adapt to the global economy, not change it or reform it. Those who compete best in the global economy enjoy upward mobility primarily through higher education, especially an elite education. So the value goes like this: “If you did not go to college, and if you are not flourishing in the new economy, your failure must be your own fault.” The workers who showed up at 6 a.m. might have written that themselves. No one is arguing that hard work is unimportant. But Sandel believes that meritocracy has a dark side — in that it reinforces this idea that if people aren’t successful and prosperous, then they failed in some way or that their work is less valuable or they are simply inferior.

A test for us: maybe we should ask how many of us read into the late arrivals of the parable a negative character value? You slept in. You were lazy. You weren’t organized. All of this might be true, they may have slept in and all the rest, but that’s not the point. The writer of the text deliberately leaves that an open question. Actually, the narrator treats that question as irrelevant. And if that is true about people who showed up late, maybe it is also true about those who showed up first. We impute positive character traits to those who showed up first, hard workers, and so on, but the parable does not.

In other words, if we feel like we’re being rewarded in this society, a modicum of humility would go a long way. Sandel puts it this way: “Is it my doing that I have the talents that society happens to prize — or is it my good luck? . . . But for the accident of birth, or the grace of God or the mystery of fate, go I.” (Michael J. Sandel, “Disdain for the Less Educated is the Last Acceptable Prejudice” in The New York Times (2 September 2020)).

But you know who rose earliest in this narrative? It wasn’t those who arrived first. The vineyard owner. She rose early. And she rises frequently. She rises five times throughout this text. She rises, first, at the early hour. Then again she rises and returns to the marketplace at 9 a.m., noon, 3 p.m. and 5 p.m. Not once does she ask about quotas; not once does she worry about harvesting schedules; not once does she say the worker is not worth her hire; not once does she say, “Where were you when?” Or “Why didn’t you take advantage of the offer the first four times?” And her concern, her concern is for one thing only: for people. Her heart yearns for people. She refuses to reduce people to economic quantities or devalue workers to whatever the market says.

The parable of the vineyard 0wner reminds me of a certain justice, the Notorious RBG: “I dissent.” Not “I respectfully dissent.” I dissent. The statement that caps off this parable isn’t “respectful” – the first will be last, and the last will be first. Maybe its familiarity blinds us to it, but this is a theological wrecking ball. God dissents from a worldview that insists that some are more deserving of dignity and opportunity than others.

It’s a dissent that isn’t a simple argument, a jurist’s dense argumentation, but vigorous alliance and even more an almost irrational love of the human in all its complexity. This from one of Ruth Bader Ginsberg’s clerks, Edith Roberts:

A natural-born judge, she was not at all judgmental. Though she spent most of her career as a women’s rights pioneer, working to ensure that other women would not, as she did, have to hide their pregnancies under baggy clothing to keep their jobs, she never made me feel she disapproved of my decision to exit the full-time legal market for 23 years while raising my children. Instead, she went out of her way to maintain my professional currency, asking me to speak at awards events and to write a biographical entry for her and recommending me wholeheartedly for the job I eventually returned to. (Edith Roberts, “Ruth Bader Ginsburg: A ‘Precise Female’” in The Washington Post (18 September 2020).

And it was late in the day.

In the parable, it is those who rose early who enjoyed the privileges of being first: why is it that they grumble about the daily wage? They agreed to it. It was good at the beginning of the day. Why isn’t good enough at the end of the day? It turns out that equality, not quantity, is the problem: “You have made those who arrived last equal to us!” They grumble because God’s generosity made the last equal to the first. They want a grace that they can calculate but grace you can calculate is not grace. All grace is amazing.

God rises early . . . even though we are late, always late. Late to arrive, late to see, late to know and feel God’s grace, late to rejoice, late to say thank you, late to laughter, late to forgive. Look at your life. How often have I been late? With humility? With vulnerability? Look at your work. The gaps in your resume. The employer who said, “Where were you all these years?” And you felt a hole open in your soul. It feels like I’m here, in the last hour of the day, somewhere next to nowhere. Yet the Lord is ever ready, she will not tarry, she will not delay. She seeks us, calls us, and sends us as her very own, no matter how late in the day it is, how many precious hours we have lost.

Alec MacGillis, friend of this congregation, has written an important piece for the New Yorker. It will be published on Monday, September 28. I urge you to read it. He writes about education, especially the public schools which are currently closed to residential students here in the City of Baltimore. Private schools are open or at least partially open to residential study. The inequities in our educational system have always been pronounced. Now they are shocking. Alec reads this social phenomenon through the eyes of a young person, Shemar. Shemar’s life doesn’t look like the life of the person who gets up early. Shemar often oversleeps. Maybe because home life is hard to come by. Sleep isn’t regular. Home isn’t regular. He’s never been easy to get in contact with. But at least before the pandemic, Shemar went to school. Caught buses, used different transits from a troubled home to a troubled school system, but at least for those hours when we saw him, along with thousands of other kids, coming to school, lining up outside their classrooms. Now we don’t see Shemar or boys and girls like him. It was vaguely comforting to see kids in a playground, or to hear the clatter of kids laughing, ambling down the street. It wasn’t without troubles, but at least it was visible. Now Shemar lives out his days in a dark room, in front of a Chrome book. Nutella was for lunch today, and it may be dinner tonight.

He’s a smart kid. Quick wit. Good with math. Very good. Tender. Even so, maybe he’ll be late when the call goes out. Like so many other kids in Baltimore, he’ll be standing somewhere next to nowhere, wondering if anyone is going to show up, call his name, choose him. Shemar might actually be one of the lucky ones, one of the “but for the grace of God go I there” ones. Someone chose him . . . or they chose one another, strangers except in their common aspiration to be fully human.

For many other kids in low-income housing, in distressed neighborhoods, living behind screened windows and locked doors . . .  for thousands of our kids in Baltimore City schools, it’s getting late in the day. But people of faith, know something about God — she keeps showing up. Justice keeps returning to that row house; hope keeps that boy looking up; compassion keeps surprising us with her power, even late into the day. I can’t grumble because of the scorching heat of being first; or I could, after all, I’m human; but maybe I’d be missing out on the best part of being human, knowing that being born late is not the same as never being at all.

May God add wisdom and understanding to the hearing of this word. Amen.