Our sermon from November 10th ended with the question, “What if?” What if we were to reimagine church?What might we see as its possibilities? Our primary text was from the prophet Haggai. Looking at the temple, specifically its ruins (it was destroyed by the Babylonian invasion of 586/87 BCE), Haggai stood in front of the assembled people of Israel and asked, “What do you see? Is it as nothing compared to what it was?” For anyone to answer that question, they would have to be at least in their seventies, i.e., old enough to have an eye-witness perspective on the temple in its glory years. And their reaction was that things looked pretty haggard compared to what they knew. 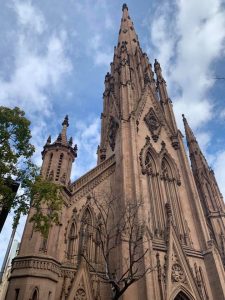 But like any prophet, he is not content to go into the night quietly. Or rather, he testifies to a God who is not willing to go into the night quietly: “Just wait, in a little while, God is going to shake the heavens, and God will raise a temple whose latter glory will be greater than its former glory.” On November 17, our guest preacher, Dr. Veronice Miles, continued with that theme in her sermon, Consider the Possibilities. Drawing from the prophet Isaiah, she sketched out what it might mean for the church today, as it opens itself to the “new thing” of God in our city.

Also, on Sunday, John McLucas shared his conviction that First & Franklin’s symbolic steeple (without discounting the importance of the physical steeple!) will continue to bear witness long into the future. On the same day, our Adult Forum, CrossCurrents, took as its starting point Matthew 24:1: “As Jesus came out of the temple and was going away, his disciples came to point out to him the buildings of the temple. Then he asked them, ‘You see these, do you? Truly, I tell you, not one stone will be left here upon another, all will be thrown down.’”

We can identify with the disciples. We live with the grandeur of a physical steeple that says Christendom loud and clear. It was built to glorify a particular cultural achievement as much as it was built to reflect the piety of the community. Like most churches, our mission has, without really intending to, supported Christendom (providing charity to the poor) rather than offering real alternatives to systems that perpetuate poverty. But we also, like the disciples, follow the restless ambulation of Jesus and that means we must keep rethinking and reimagining our calling as a church.

Taken together, it appears that the Spirit may be prompting us to reimagine who and what we are about relative to this ambulatory Jesus, who keeps moving. Indeed, with a lot of other churches, we’re at an inflection point, somewhere between the end of Christendom and whatever comes next.

Closing may be what comes next. Churches are actually already closing. And yet, at the same time, is it possible that the Spirit is in the process of opening all of us to what comes next? Looking at the big picture, Stanley Hauerwas writes, “ . . . [T]he church began by providing deliverance from the disasters that attended the collapse of the Roman rule in the West but ended by becoming the basis of a new order for society [Christendom].”

What could all this mean? Where are we, as a church, in this cycle of “deliverance from disasters” and being the “basis of a newly ordered” society? Between closing and opening? As we look around Baltimore, we see high unemployment; deep social and economic inequities; we see boarded-up row houses in some neighborhoods, and private police security in other neighborhoods; we see white-flight and the shrinking of the middle class. Some would suggest that we are seeing the physical collapse of white capitalist rule in the United States.

If that is the case, is it perhaps an invitation for us to shift from “establishing” a social order (or passively supporting a dysfunctional one) to something like fostering micro-political, environmental, and economic alternatives?

What if . . .our campus became a site where we played a micro-role in reversing Baltimore’s food desert? Or what if our campus were to undergo a greening make-over, addressing climate crisis right here, in the heart of Mt. Vernon? Or what if part of our campus became a mentoring center for young people from our public schools, supporting young scholars throughout their educational journeys? Or what if our campus became a place for artists to congregate (most graduates from The Peabody Institute have few options for studio space), to encourage and affirm their importance for the whole life of the city? Or, what if our campus became an incubator for small business entrepreneurs, offering affordable office space, and mentors to support them? What if we partnered with an organization like City Seeds or Korner Boyz Enterprises, leveraging our strategically located real estate towards a collaborative vision to prosper the city?

Whatever our eventual answer to that question, we need to keep it real: we would not be laying the foundation for a new social order, but in keeping with more modest budgets and reduced capacities, it might mean partnering to foster a small-scale alternative to the present one. We don’t have the capacity as a congregation to make big things happen on our own, but we may have the capacity to collaborate in creative ways with partners in our city, organizations and faith communities, that are committed to prospering our city.

And for us, what do we get out of this? Maybe our answer to the question, “What if?” could be a vision that we could believe in, embrace, and lift up to the city, even higher than the 270-foot steeple that graces our skyline today.

What if our former glory is nothing compared to our latter glory?