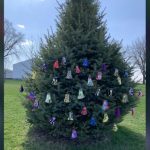 22Then Moses ordered Israel to set out from the Red Sea, and they went into the wilderness of Shur. They went three days in the wilderness and found no water. 23When they came to Marah, they could not drink the water of Marah because it was bitter. That is why it was called Marah. 24And the people complained against Moses, saying, “What shall we drink?” 25He cried out to the LORD; and the LORD showed him a piece of wood; he threw it into the water, and the water became sweet.

There the LORD made for them a statute and an ordinance and there he put them to the test. 26He said, “If you will listen carefully to the voice of the LORD your God, and do what is right in his sight, and give heed to his commandments and keep all his statutes, I will not bring upon you any of the diseases that I brought upon the Egyptians; for I am the LORD who heals you.”

27Then they came to Elim, where there were twelve springs of water and seventy palm trees; and they camped there by the water.

1The whole congregation of the Israelites set out from Elim; and Israel came to the wilderness of Sin, which is between Elim and Sinai, on the fifteenth day of the second month after they had departed from the land of Egypt. 2The whole congregation of the Israelites complained against Moses and Aaron in the wilderness. 3The Israelites said to them, “If only we had died by the hand of the LORD in the land of Egypt, when we sat by the fleshpots and ate our fill of bread; for you have brought us out into this wilderness to kill this whole assembly with hunger.”

4Then the LORD said to Moses, “I am going to rain bread from heaven for you, and each day the people shall go out and gather enough for that day. In that way I will test them, whether they will follow my instruction or not. 5On the sixth day, when they prepare what they bring in, it will be twice as much as they gather on other days.” 6So Moses and Aaron said to all the Israelites, “In the evening you shall know that it was the LORD who brought you out of the land of Egypt, 7and in the morning you shall see the glory of the LORD, because he has heard your complaining against the LORD. For what are we, that you complain against us?” 8And Moses said, “When the LORD gives you meat to eat in the evening and your fill of bread in the morning, because the LORD has heard the complaining that you utter against him – what are we? Your complaining is not against us but against the LORD.”

The Exodus story speaks of God’s people, especially their reactions to a time of distress. In the desolate wilderness, there was no potable water: “What shall we drink?” (Exodus 15:22-24). Sometimes they cried out to God; sometimes they complained about Moses or, alternately, Moses complained about them. Collectively, they voice deep cynicism: “If only we had died by the hand of the Lord in the land of Egypt, when we sat by the fleshpots and ate our fill of bread: for you brought us out into this wilderness to kill this whole assembly with hunger” (16:3). For the people following Moses, it was famine, it was thirst, it was isolation. But at the same time, the narrator records inexplicable refreshment of bread, water, and nourishment. God supplies for the people in a timely way, day by day, with mana from heaven (15:25, 27; 16:4, 9-31).

Perhaps we hear this text, especially the scarcity, in our own day, when food insecurity poses a real threat to the already distressed poor of this country and, indeed, the world. That is there. But as I listened to these texts, I also overheard my own complaints, which don’t rise to the level of hunger, or thirst, or distress. Grocery shopping has become tricky. Maintaining a “strategic reserve” of toilet paper is something of a preoccupation. And then there are the slight pangs. Yesterday afternoon, I was with the kids at a school parking lot near our house, which has become a skateboard and bicycle park during the school closures. While the kids played, I searched my smartphone for Shenandoah National Park, wondering if they were still open during the pandemic. I guess I knew they would be closed, but my heart sank anyway — not able to go camping this spring! Sigh.

While this is real for me, this text suggests that these thoughts, and sentiments like them, can easily evolve into a false sense of scarcity. That is, we hear or feel our own inconveniences or the interruptions to our lifestyle as famine, or thirst, or social distress. There is a profound difference between lifestyle disruption and famine. It is best that we keep that distinction clear in our minds. Why? Because two or maybe three things happen when we let that difference go unchecked. In no particular order, maybe we first lose a sense of the richness of God towards all that God has made. In the Exodus text, the narrator plops down this hugely generous moment in the desert wandering, the twelve springs of freshwater and the seventy palm trees, where the people camped during their sojourn. No one complained, which is not a surprise. But no one gave thanks either. Perhaps the narrator records it — almost without comment — to remind us to give thanks for the plenitude of God’s provision for us in this life.

Second, we are at risk of trivializing real suffering. A government official said they were tired of hearing people call to complain that the shut-down had interrupted their golf outings while, at the same time, people of color were dying from the pandemic at disproportionate numbers, first-responders were sacrificing their lives and well-being, and still others faced unemployment and economic insecurity. If we live with false narratives of scarcity, we are at risk of missing real scarcity and, crucially, the moral courage it will take from all of us to meet this challenge.

Third, we talk about “weaponizing” different things, including the pandemic. How about activating our faith? A woman in Iowa has taken up sowing facemasks which she hangs on a tree. She calls it a “giving tree” — it allows her to “give” the masks while also observing social distancing. She makes the masks from different designs and, on the tree, they seem almost like colorful decorations, or odd blossoms of hope. She says that when she started, she planned to make 100 masks, but soon she found she couldn’t keep up with the demand. She says she’s a giver not a taker, so she’s always happy. She restocks the tree almost daily and almost daily they disappear.

She says she feels overwhelmed at times but plans to continue until the pandemic is over.