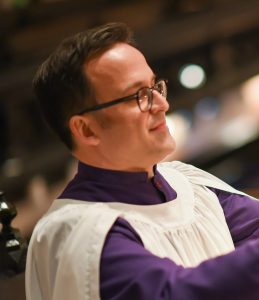 Jason Kissel is Minister of Music & Organist at First & Franklin Presbyterian Church in Baltimore, Maryland where he conducts the Sanctuary Choir (the church's Sunday choir comprised of amateur and professional singers) and works closely with The Spire Series Committee in creating and presenting high quality arts programming for the community. Dr. Kissel has led the church to commission new choral music by Robert Sirota and Lois Hopkins; in addition, he has introduced a significant amount of multi-cultural choral literature and global music to the congregation at First & Franklin.

Dr. Kissel maintains a private teaching studio in Baltimore, in addition to serving as Instructor of Music Theory at Baltimore School for the Arts. He has held teaching positions at The Pennsylvania State University (State College, PA), Chatham College, Pittsburgh, PA, and Westminster College, New Wilmington, PA. His students have won top prizes in performance competitions of the American Guild of Organists, and have gained acceptance into leading American music schools. Dr. Kissel has performed throughout the mid-Atlantic region, and in 2007 served as faculty organist and recitalist for the Presbyterian Association of Musicians’ Westminster Conference on worship and music.  He has also accompanied seven European tours by American and British choirs, performing on the organs at Westminster Abbey, Canterbury Cathedral, Wells Cathedral and St. Mary's Church, Warwick. In 2004, he toured South Korea and the United States as organist with the choir of the Young Nak Presbyterian Church in Seoul, Korea, the largest Presbyterian congregation in the world.

Dr. Kissel has served in musical leadership positions at Shadyside Presbyterian Church, Pittsburgh, PA and New Wilmington Presbyterian Church, New Wilmington, PA. He received degrees in sacred music and organ performance from the Peabody Conservatory of the Johns Hopkins University (DMA), Duquesne University, Pittsburgh, PA (MM) and Westminster College, New Wilmington, PA (BM).  An active member of the American Guild of Organists (AGO), he served a four-year term as elected Dean of the Baltimore Chapter of the AGO and is a past member of the Board of Directors of Young Audiences/Arts for Learning of Maryland.  He is the recipient of the James Winship Lewis Memorial Award, given by the faculty and deans of the Peabody Conservatory, for his musical leadership within the Peabody community, and is also the 2004 recipient of the Outstanding Young Alumni Award, given by Westminster College.