My contribution to the Epistles from Baltimore series for General Assembly was referenced in a motion that passed calling on the PCUSA to begin a process of repentance and study relative to white privilege and systemic racism.

I submitted the piece, Lazarus is Walking: A Resurrection Uprising in Baltimore, to the Advisory Committee on Social Witness well before the pandemic forced the Assembly to meet online, before the killing of George Floyd in police custody — I also wrote at a time when some white leaders in the PCUSA still felt that it wasn’t an issue for white suburbs, but only for the inner city. Even so, the GA called every level of the church to a period of study and action. This piece is a part of that call. Please share in your social and church circles. 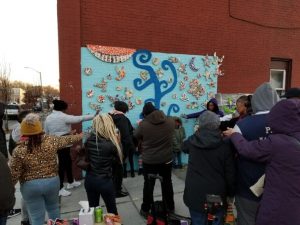 In the planning for this assembly, this was a familiar comment: “What’s happening in Baltimore doesn’t reflect what’s going on in our communities. …” This, or something close to it, was a comment made frequently enough in the planning stages for this meeting that it deserves a firm rebuttal, not because it is unique but because it is commonplace and wrong.

At the risk of sounding glib, it is about Baltimore. Ours is a national church, a predominantly white church, and it is meeting in the heart of a majority black city, where Freddie Gray died as a result of police brutality in 2015.5 From 2015 through 2019, there have been 1,660 homicides in Baltimore, 348 in 2019 alone.6 That’s 55 deaths per 100,000 people, higher than the per capita rate of homicide in New York, Philadelphia, Los Angeles, or Chicago. Alone, the raw numbers disguise the impact of the violence. In 2015, 93 percent of the victims were black. There have been around one thousand people wounded every year by gunfire. One person laments the carnage as a scourge of “hurt people hurting hurt people.”7

Even so, talking about this as an anomalous crime wave falling within the unique confines of the City of Baltimore fails to name the systemic and racial contours of the violence in our nation. It presupposes that highly segregated congregations of the suburbs and rural parts of America are, by definition, sane while Baltimore (and cities like it) are insane.

This gets harder to believe with each act of white terrorism. Consider the April 27, 2019, antisemitic attack on the Chabad Synagogue in Poway, California. According to the 2010 U.S. Census, Poway is 76.9 percent white. The pastors of the Orthodox Presbyterian Church (majority white) where the white terrorist, John Earnest (nineteen-years old) worshipped, where his father was an ordained ruling elder, would not have seen themselves as actively racist, and would in all likelihood self-describe as antiracist. However, they do pride themselves on their orthodoxy. Indeed, Earnest’s pastors were not shocked by the racist ideas within his “manifesto”—they were shocked that Earnest was, by their standards, theologically coherent. OPC leaders believe that white supremacist views are incompatible with their doctrinal statements.8 Maybe, to explain this contradiction, some would say this outburst was an “anomaly”—limited to one person’s mental illness, unrelated to his apparent theological literacy.”

W.E.B. Du Bois might see it differently. Seemingly isolated expressions of white racism “are not instances of ‘Europe gone mad’ but of Europe itself, ‘the real soul of white culture … stripped and visible today.’”9 Could it be possible that the madness of our city is only more visible here than it is everywhere else?”

Read more at  Lazarus is Walking (published on Justice Unbound, an online journal of the PCUSA).